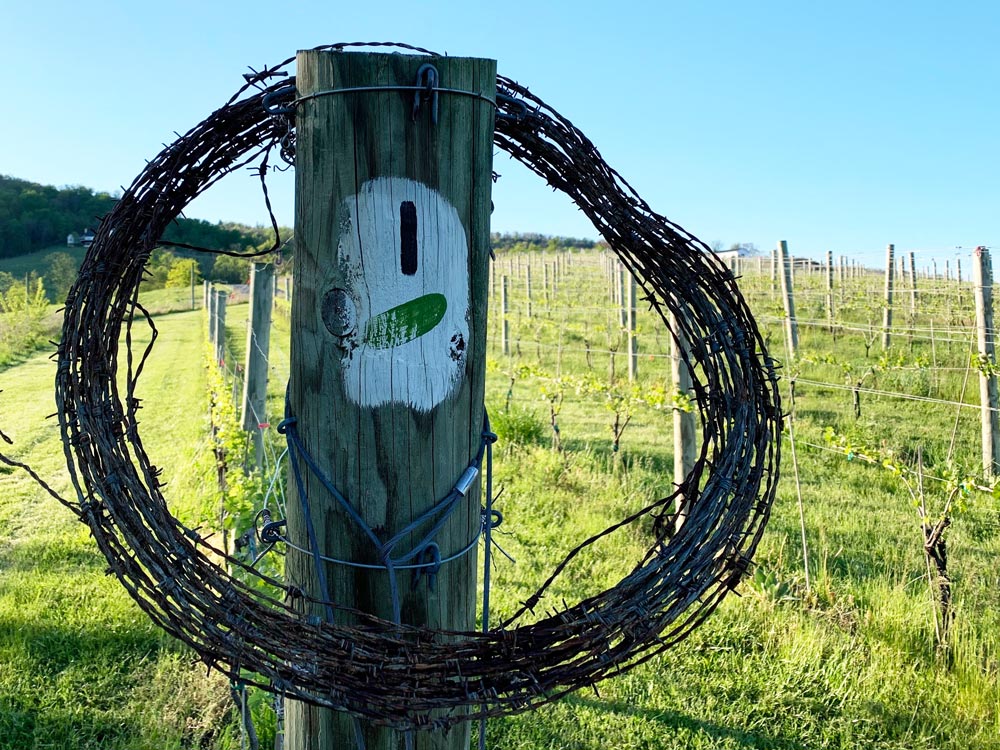 There’s a power in the number one.

Some say it’s a symbol of unity, of the universe, and is the source of all numbers – a foundation, if you will. After all, you can create any other number, any other combination, by adding as many ones together as you need.

In numerology-speak, the number one is considered the root of all, standing for confidence, power, and action.

At October One Vineyard, clearly the number one means something, too.

Ahem – October ONE Vineyard, named partially because it’s the date of Bob and Loree’s wedding anniversary.

But the number one is also foundational to the way O1V wines are grown – the way they are made – at the farm and in the vineyard.

Every bottle of October One Vineyard wine is crafted from only ONE grape varietal grown in only ONE place.

In the inaugural Wine Share shipment in Spring 2020, the October One Vineyard Red Wine Share was a vertical of three vintages of Cabernet Sauvignon (’15, ’17, ’18). Yes, there was a gap in those years. You may notice 2016 is missing.

That was the year we got hit by a giant hail storm,” Bob said. “There is a story between the lines there.”

The vertical shipment, even without 2016, shows the range of weather, and the taste of terroir, from the vineyard.

According to Bob, 2015 was one of the best growing seasons at the farm in a long time.

“When you break it down, we had great sunlight, less rain, and the entire season had a nice pace to it,” Bob said. “We didn’t get overwhelmed with rain and we were able to hang Bordeaux [grapes] well into October. In Virginia, that doesn’t happen all the time because the hurricanes that turn left late in the growing season can really shorten our ripening for wine like Cab Sav.”

The 2017 growing season, Bob said, was a little more “middle of the road. We didn’t have as long of a growing season. It wasn’t very rainy. The fruit we received wasn’t super bountiful, but it was very clean.”

As a result, the winemaker had a super clean fruit that wasn’t highly overripe to work with, and that resulting in wines with more moderate alcohols in them.

Then there was 2018. It was, by far, one of the worst growing seasons in memory, Bob said, mainly because of the amount of rain (a lot of it), and a lack of sunlight.

“With regard to our reds in 2018 we (me, Sevi, Nate, and Mother Nature) decided to bring you mostly rose’ wine from our Boudreaux varietals and making only two barrels of red wine,” Bob said.

When you take all that context into consideration, and line each of those single varietal wines that were grown in the same place up against each other, what you get is an ability to get the one taste from that one year.

“We are committed to crafting high-quality wines that express our terroir and the vintage year after year,” Bob said. “We feel single vineyard, single varietal wines provide context to understand not only this place, but also the influence of mother nature on the vintage of a wine.”

There’s no doubt about it. It’s tough to grow wine. Sometimes it is tougher in Virginia due to the dynamic conditions from year to year, but we have come to appreciate the challenge and ultimately the authentic outcomes.

It’s an art and a science. In the U.S., winemakers can label a wine as a varietal, but that only requires the wine be 75% that grape. It could mean in some bottles of Merlot you drink, there are actually five or six different grapes in it. There is NOTHING wrong with that approach. In fact, it showcases why wine, and the blending of which, can be so special, so artistic.

But Bob and Loree are committed to helping showcase the power of one by embracing and showcasing one of Virginia wine’s most compelling characteristics – the varied vintage.

If there’s one thing that brings to light the environment October One Vineyard wines are crafted in, bringing out the truest expression of the land, it’s remaining committed to one vineyard and one varietal in every one bottle.

“If you want to follow this place and the region behind a particular varietal,” Bob said, “this is a cool way to do it.”

FUN SIDE NOTE FOR THE NUMBER ONE O1V FANS OUT THERE:

Bob will tell you if you ask that he likes numbers. He even admits to having a lucky number – and no, one is not his lucky number.

Next time you are scrolling through the October One Vineyard’s Instagram page, pay close attention to the numbers on the vineyard posts in the photos we share.